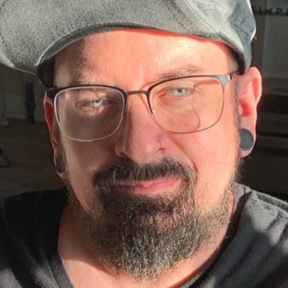 Welcome into this spiritual space-time continuum, an invitation into the imagination of an artist who uses imagery and icons as vehicles for prayer and meditation to deepen his own understanding of the planet he resides on. You may not fully understand or agree with Thomas, however, this is an invitation into the mind of one who, according to his parents, has had an overactive imagination since birth.

Thomas שמות McEwen is an ordained minister who holds an undergraduate degree in Biblical studies and Hebrew, a Master of Divinity, and postgraduate work in chaplaincy. Thomas has worked in health care with those who are dying, sitting with patients while gently holding space for them to reflect on their lives. Thomas paints their portrait with them at the bedside and paints words at their funeral to describe conversations had for those who need those comforting words of hope, healing, and reconciliation.

More recently Thomas’ work has been more closely connected to those with mental illnesses and addictions. Thomas’ heart for the disenfranchised, troubled, disinherited, and often discarded is a prevailing theme in his art and prayer life along with deeper thoughts on the significance of the redemption of all things both in the physical realm of existence and the metaphysical realm yet unseen.

Though his work in the health care industry was meaningful and aligned with many of his gifts and talents, by stepping away earlier this year, he has had the opportunity to utilize his creative nature more fully. This show is the outcome of months spent in prayerful and meditative painting, connecting with stories and images that serve as traditional and personal spiritual touchpoints while also allowing for connection with others in his community as they began to understand and contribute to his work in different ways.

Thomas’ aim was to make beautiful art with items that had been deemed trash - discarded things. And as others began to hear about his work, additional materials were contributed rather than disposed of. This included damaged canvases, latex paint, spray paint, and miscellaneous materials donated by friends and neighbors. As a result, the pieces in this show are composed of 80% recycled materials, another beautiful image of redemption on these walls.

The majority of what you’ll see in this show is about prayer and meditation, both Jewish and Christian imagery taken from the Scriptures, and other source material from mystical books such as the Zohar, Book of Creation, and Enoch I. They also reflect ancient prayers, the texts of which align their reader with the Creator to move from receiver to one who bestows. You will also see a contemporary image repeated, like a chant, a mantra, a prayer – the DeLorean and what it has come to represent as a form of time travel. Imagine you could put a note, or a prayer in a DeLorean, and send it back in time to fix things. Wouldn’t that be an awesome idea? Yet if we could go back in time, we might fix one thing, only to break ten more. However, prayer and meditation act on their own will, and though they may not fix things the way we want, nevertheless, the artist feels that no prayer or meditation is ever wasted.

In the Bible, Jesus is recorded as having stated that it is better to give than to receive. It is the artist’s intention that through the gift of this installation all might receive some form of Heaven, Eternal Grace, and Peace. Though Thomas does not have the power to bestow this upon anyone, he seeks to extend the invitation he has received from the Creator יהוה , Thomas simply invites you to the Feast through the invitation of Bestowal that you to may invite others into that peace and rest. 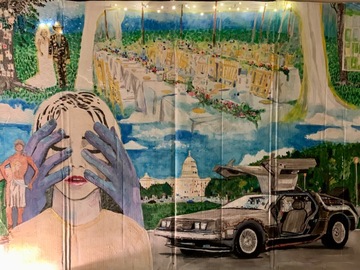